We here at Jack’s Attic love all things ghostly.  One of the things we routinely seek out and search for is photographic evidence of life after death in the form of apparitions captured on film.  In one of our recent searches we stumbled across the amazingly haunting spirit photography of William Hope.

William Hope, (1863 – March 8, 1933), was a pioneer of so-called “spirit photography”. Based in Crewe, England, he was a member of the well known spiritualists group, the Crewe Circle and died in Salford hospital on March 8 1933.

As a young man Hope was employed as a carpenter, but he quickly came to prominence in paranormal circles after claimed to be able to capture images of spirits on camera.

Hope produced his first spirit image in 1905. Soon afterwards he formed the Crewe Circle Spiritualist group, with himself as the leader. 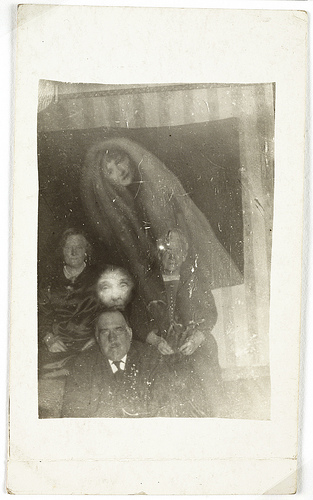 Eventually, Hope’s photographs were exposed as fakes.  Despite that fact, Hope retained a noted following in the paranormal community until his death in 1933.

More of William Hope’s spirit photography can be viewed HERE.

One thought on “The Spirit Photography of William Hope”