It’s that time of the year again.  A time when the veil between the world of the living and the world of the dead begins to weaken and thin.  A time for a celebration of all things ghastly and macabre.  When indulging in the darker side of life is not only tolerated but expected and relished.

In keeping with a tradition that started back in 2010, I’ll be watching at least one horror movie or television show, playing one horror video game or otherwise engaging  in some horror related media (books, magazines, boardgames etc.) each day of October until Halloween.  So, with that being said: 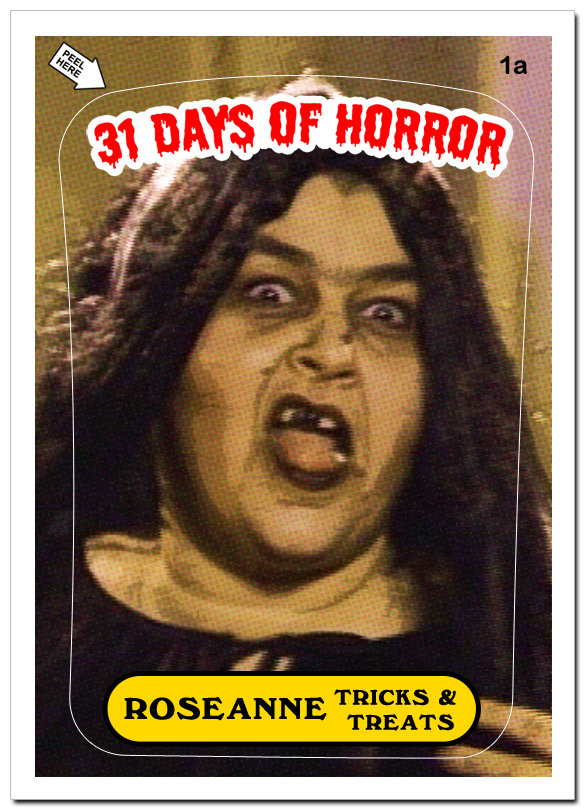 Roseanne was one of the greatest and most beloved sitcoms to ever air on broadcast television.  It chronicled the working class, suburban exploits of Roseanne Connor, her husband Dan and their children Becky, Darlene and DJ.  With a realistic depiction of small time life in the Midwest, Roseanne was instantly relatable to a wide audience who recognized not only themselves and their family in the shows characters and storylines but also the familiar day to day drudgery that when viewed from just the right angle was really funny.

Roseanne’s yearly Halloween episodes began during season two in 1989 and ran through the shows final (9th) season in 1996.  Much like the Simpson’s Treehouse of Horror, the annual Roseanne Halloween episodes were instant classics.  The earlier episodes especially still stand out as favorites amongst fans.

The Halloween episodes proved to be so popular that they were collected together on:  Roseanne Tricks & Treats, a DVD showcasing every Halloween special from season two through nine.  Pick up your own copy on Amazon for a paltry $5.98.